Solo Camping in the Wilds of Three Rivers It's 9:47pm and I just entered my tent. I'm camping solo (for the first time!) at Three Rivers Hideaway (last campground/RV park before entering Sequoia National Park) and I'm towards the back of the grounds, away from the motor homes and double wides. I'm also the only tent in the park. Picture a large dirt field with a few picnic tables and fire pits, a white building at the end that houses two restrooms and a shower, and then me, in my 4-person tent, next to my parked Honda Ridgeline, rapidly one finger typing on my iPhone.

I'm nervous. Anxious. Worried about the possibilities. This is a new experience; I've always camped with friends or family, surrounded by tents and motor homes of strangers. There's safety in numbers, right? I'm missing that here.  Every little sound makes my hearing sharpen as my brain tries to identify what I'm hearing and my increased heartbeat prays that it won't become a danger to me.

Bears. Cougars. Two legged threats. How do I trust everything and everyone around me to actually fall asleep? The only similar 'fearful of falling asleep' feelings I've ever experienced (and it doesn't truly compare because the threat was in my head) is when I've been by myself in the house and just watched a scary movie: I start to wonder if Freddy Krueger is under my bed or a serial killer is waiting in the closet. But that's an easy fix: I turn on the lights, check under the bed and in my closet, then turn on a Disney movie.

Right now, here, alone in my tent, I just lay here, listening to the barking of dogs (what exactly are they barking at so late at night...?), the slithering of...I don't know what, and the incessant chirping of crickets. Waiting for the sounds of a larger animal to make its way towards me. Waiting to hear a stranger's footsteps in the gravel. Waiting for exhaustion to creep in and for sleep to overtake me. 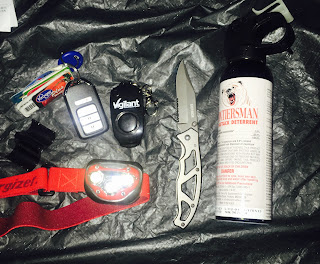 I have a piercing safety whistle, a small knife (thanks mom), bear spray, and the keys to set off the truck alarm and/or light. Hopefully, if anything does happen, I'll make enough racket to alert the old guys at the weekly poker game (they apparently play until 2am each week) or someone in the RV's atop the hill.

It doesn't help that I just watched the Astros beat the Dodgers in the 11th inning! Whoop! What an amazing game. Okay, perhaps the elevated heart rate and anxiousness could be due to the game. Maybe. Like 5%.

On a positive note: I watched the game with the GM of Three Rivers and she made me feel safe here. Honestly, if I hadn't gone back to the front office to watch the game, I most likely would have slept in the truck. I was still tempted...I'm just so isolated.

If it scares you even a little bit, it's good for the soul, right?

Here's to hoping for a restful and quiet night of sleep.

Updates through the night:
11:30pm - multiple dogs went off on a barking spree. Luckily, they ran in the opposite direction of me. Still don't know what they were chasing...

Fell into a deep sleep (yay) then woke up thinking it was 6am. Nope. 2am.

3:00am - truck beeped and lit up the tent. I flipped over, grabbed the keys (which were arms reach away from me so I hadn't accidentally hit them) and hit lock. Tent dimmed. I sure hope I was dreaming this and the truck didn't just unlock on its own. I even put on my shoes to check to see if any of the windows were down (while at Grand Tetons, I was sitting on the truck bed, keys in my pocket, when all four widows rolled down half way. Researched it and it's either Honda designed or a glitch but I haven't been able to replicate it.).

4:32pm - a slight shuffling sound like a possum or raccoon. Hit the truck lock a few times in hope the lights and beeps would scare it away. No additional sounds. Maybe it's still there? Hiding. Waiting.

5:18am - someone let their dog out to go to the bathroom and kept telling it to hurry up. Which brought to my attention my own need for the facilities. Shoes on, headlamp in hand, knife in the pocket, walking to the bathroom. 3 mins later...made it back!! No life forms spotted.

6:35am - awakened by the sounds of a jingling dog collar, the shuffling of paws in gravel, and the whispered voice of an old man saying, "No, Queenie"  "No, Queenie"  "No, Queenie" as the dog sniffed around the tent. Then I stretched my entire body, arms over my head, legs straight and extended as far as both could go. Which caused my left foot to experience a Charley horse. #dehydrated

6:56am - on the other side of the fence (I'd say less than 15 feet away), a large (I'm assuming this size based on the amazing talent of my ears) dump truck begins backing up.  Roaring engine. Beep. Beep. Beeep. Would it ever shut up?

Perhaps it was time to unwrap myself from my sleeping bag, roll off my air mattress, and start the day?

Nope, back to sleep for another 40 mins.

And hey! I survived my first solo night camping!