It’s a beautiful 45 degrees, the sun is shining, the wind blowing, and we are heading west on Interstate 20 towards Jackson, Wyoming. The Grand Tetons and Yellowstone are awaiting our arrival with snow covered mountain tops (yikes). Many thanks to Laura for gifting me snow boots! They’ll come in handy over the next week as we trek through the mountains searching for bears and moose (yes, we have bear spray, and yes, I hope I’m close enough to the wild animals to actually see them (kinda blind here), but far enough away that they won’t feel threatened and attack! Look at me being animal smart.). 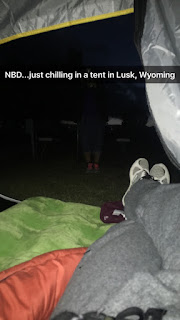 Last night, we stopped at a campground and spent our first night in a tent. During the full harvest moon no less. Beautiful orange glow around the moon as we were setting up our tent. There were many hunters staying there as well, and our observations led us to feel ill equipped at camping (slight understatement). Our tent is nylon; theirs appeared to be made from canvas.  Ours is a typical tent shape with two large triangular mesh windows at the top that we had to cover with a nylon flap; theirs looked like it belonged on an African Safari, housing a desert prince (picture a tall tent you can stand up in, with straight side walls, made of canvas). They had grills and the smell of barbecue made our stomachs rumble; we had cold, leftover pizza (which was delicious). They had a tiny (yeah, take that, hunters!) fire, and we had sweat pants and hiking socks for warmth. We did have flashlights (yay, go us), and our tent (thankfully) kept the rain out (phew!).

Overall, it was a fun experience, to lay on our blow up air mattresses, giggling like school girls while listening to an audio book, and viewing the beautiful Full Harvest Moon. Our peace was only periodically interrupted by the rowdiness of our neighbors, the splatter of rain drops or people leaving and arriving. We were asleep by 10:00 pm (earliest time this entire trip!) and awoke naturally around 6:40 am. I loved the crispness of the cool air, but started sweating in my layers and sleeping bag (courtesy of Kelsey – mucho thanks!). In conclusion, I’m happy to report, we can handle tent camping in 45 degree weather!

Now, as the lows are expected to be in the low 20’s over the next few days, we will be staying in a hotel, hostel, or attempting to couch surf! J Should be fun. 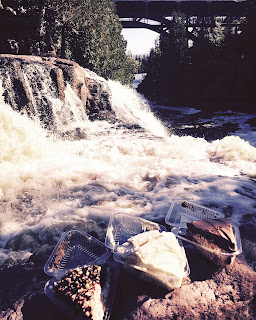 Last Saturday, we left Minneapolis and visited Isle Royale National Park and Voyageurs National Park. I highly recommend taking a few days and taking the drive from Minnie to Grand Portage. Absolutely beautiful along the shore line of Lake Superior. We stopped at Gooseberry Falls State Park, Glensheen Mansion, and ate pies at Betty’s Pies. It was an enjoyable, leisure drive, intermixed with gorgeous views of the lake. 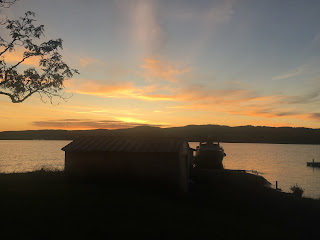 After arriving in Grand Portage, we spent the night at the local casino hotel and ended the night extremely happy (woot woot). The next morning, we arrived at the marina a little before 8:00 am, dressed in layers and ready for our 2 hour boat trip to the island. The ride over Lake Superior was cold and choppy with the waves about 4 feet high (maybe bigger, perhaps smaller, because really, how do you judge wave size from a boat?).

Mom entered the boat and sat inside, but I love to be outside, so I gestured for us to move to the back of the boat. Best decision, best location! The people in front became drenched from the waves. The people inside had to deal with loud engine noises, plus an exacerbated feeling of movement (aka – sea sickness; hilarious story: the first mate led 4 different people to the back of the boat, whose faces were green with nausea. He had a death grip on their hands, attempting to quickly walk them in our direction while battling the up and down motion of the boat. A few times, the sea sick person would fall into a bench or be helped along by another person sitting on one of the benches. Eventually, they made it to the back and were able to stare at the horizon and win their battle over sea sickness. Yay.). 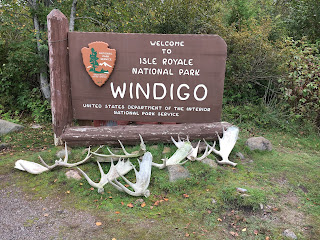 The back was the best. I stood the entire time, leaning against the side railing, watching where we were going, and getting sporadically splashed with the waves (luckily I had on my water proof winter coat, gloves, and hat, and only became a tad bit cold). Once we arrived on the island, we hiked around for a few hours, warming up, and exploring. With 1,500 moose on the island, we were hoping for an up close and personal visit, but unfortunately, the only moose we saw were on the phone of a 20 something year old who had been on the island since the Wednesday before (we went there on Sunday). We learned that animals like to come out for a drink around dusk (or early morning) which just means we need to camp out in moose and bear country to experience an exciting siting! 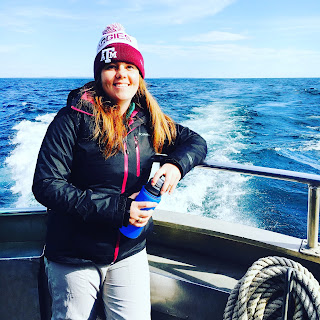 The ride back was even better because the sun was shining and it was roughly 15 degrees warmer (love the sun on my face). We again traveled in the back of the boat. This time, I stood against the far back, hooking my arms around the railing, then back through to the outside. Somehow, I was able to fall asleep this way, with my head falling forward and my legs naturally bracing and riding the waves. A wonderful 30 minute nap. Everyone asked me how I was able to sleep in that uncomfortable position, standing up no less. No idea, but I definitely slept! 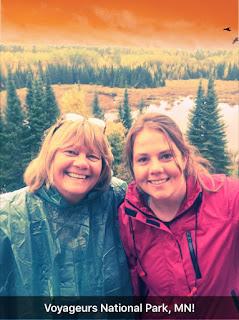 Voyageurs was an enjoyable hike as well. As we decided to make the drive to Fergus Falls after our hike, we only had time for a short one. We took the Blind Ash Bay Trail, a 2.5 mile loop that followed along Kabetogama Lake and had beautiful views of the lake. Amazing luck, we ran into a Park Ranger who happened to be at the closed Ash River Visitor Center, moving items to a National Park van. She was able to find the stamp and ink pad for our passport books! Funny comment she made, “You didn’t travel all the way up here just to do the Blind Ash Bay Trail, right?” Yes, yes, we did. Haha. If we had more time, we would re-visit and tour Voyageurs from a boat. But the weather was chilly and rainy and would not have been enjoyable from a boat. Perhaps one day in the future!

Next entry: the North Dakota and South Dakota Badlands, plus lots of animals!