Exploration of the Rockies!! 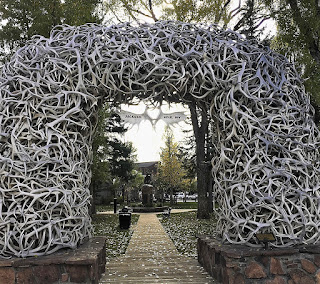 After camping in a tent, the executive decision was made to sleep in a hotel (or maybe it had something to do with the below freezing temps in Wyoming? hah). We drove across the open range with strong winds, over the continental divide (and our first sighting of snow and beautiful mountains!), to the town of Jackson, Wyoming. Arriving in the early afternoon allowed plenty of time to explore this quaint tourist town and enjoy a filling and delicious meal (because there’s only so many PB&J sandwiches, cheerios, and jerky you can eat before you need something made in a kitchen!). Our hotel check-in guy stated it’s tradition to eat at the Silver Dollar Bar & Grill then enjoy drinks at the Million Dollar Cowboy Bar. So we followed his suggestions. The MDCB’s bar seats were saddles! We hopped aboard, asked the bartender to switch to the USA soccer match (boo USMNT for not qualifying!) and drank local beer while conversing with bar patrons about sighted animals and what we could expect to see.

Made it back to the hotel room by 7:00pm (we tried to stay out until the live music started at 7:30pm but we just couldn’t do it), showered (weeee), and then relaxed (writing for me, playing Words with Friends for mom.). We woke early the next day (so excited to explore this beautiful area!), grabbed tea from the front office area (extra zip, not that we needed it because we were in JACKSON, WYOMING!), stopped at K-Mart (yes, they do exist!) for energy bars, snow pants, and mom wanted to buy another bear spray because she didn’t feel comfortable with only me having a can (spot a bear, double attack! Pow!), then drove north to Grand Teton National Park via Moose-Wilson Road (which promised animal sightings!). FYI: these roads were horrendous, so many pot holes. The truck bounced all over the road, no matter how fast or slow we drove, and there was no way to avoid hitting them. 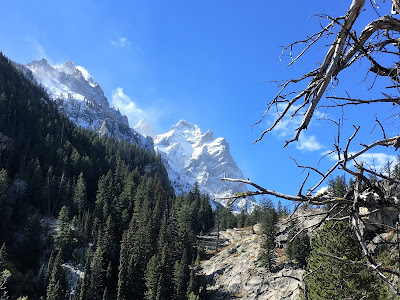 Welp, those promised animal sightings, lies! But the views of the snow topped mountains were absolutely gorgeous. We drove to the String Lake Trailhead to hike towards Hidden Falls and Inspiration Point. The lake, the mountains, the falls, all breathtaking. I wonder if spring and wildflowers would make the views more beautiful or if the snow topped mountain peaks were what made the view spectacular?

Arriving at the trail head, we were surprised by the crowds and lack of parking (considering it was off season and this was the last weekend before everything shut down for the winter.). We parked and started the 2.2 mile hike towards the falls. The trail was relatively flat, taking us alongside Jenny Lake. Once we walked 1.4 miles, the trail started inclining (.5 miles towards Hidden Falls, then another .3 towards Inspiration Point).

We carried our bear spray cans within easy reach in the outside pocket of our packs. The Park Ranger had a practice one and showed us how to properly use it. If we spot a bear, immediately unclip the top buckle of our packs, drop one shoulder strap, swing the pack in front of us, so the pocket with the spray would be directly in front of us. Pulling the can out, we learned how to remove the safety clip, one handed, and then spray the attacking bear. Assuming no glitches happen and we’re calm under pressure, we were prepared for any grizzlies or black bears that decided to cross our path! Okay, secretly, we were a tad apprehensive. Could you imagine if a bear walked across our path? Uff-da! That would be scary. Truthfully, we were hoping to spot a bear (or two!) crossing the road while we were safely in our car (please no walking upon a bear that is with her cubs or eating). :) 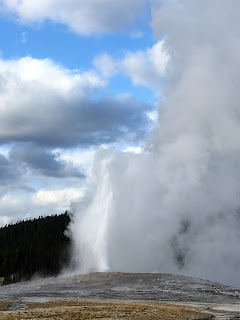 After the hike, we drove towards Yellowstone and made it to Old Faithful with 10 minutes to spare before she erupted (perfect, unplanned timing!). To be honest, she was not as impressive as I’d be led to believe. We stopped at the Midway Geyer Basin (which had beautiful colors and steam) before heading into West Yellowstone to sleep. Luckily, it was the last weekend before everything shut down for the season, and we were able to find a room. 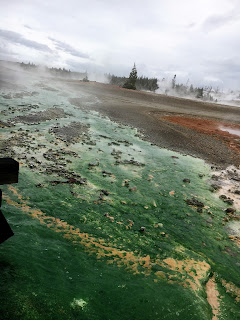 The roads in Yellowstone essentially form a two ball snowman (with uneven circles). After our night in West YS, we found out that they had to close multiple roads due to ice and unsafe driving conditions (darn the snow that I love so much!). We’d already seen the bottom half, but unfortunately, we could not see the eastern side of the top circle. We decided to explore what we could and then start driving towards Glacier NP, not knowing when (or if) they would open these roads. 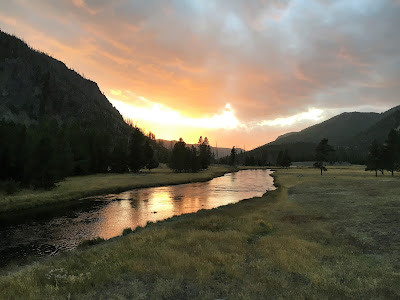 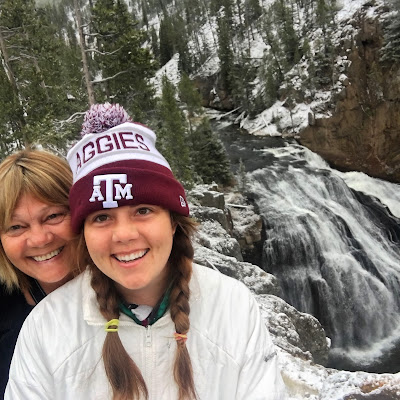 After spending the night in Helena, MT, a quick drive took us into Glacier National Park, which was a ghost town. We saw a handful of cars on the park roads, but everything had shut down the day before. One gas station had pumps open, but the store was closed. No hotels were open. No public restrooms. Lucky for us, they left the visitor center restrooms open (they would be by early the next day to start draining them), so we decided to truck camp in the parking lot. The winds that night reached 26 mph, which may not seem that strong, but the truck was rocking all night, which made the experience even more memorable (we watched Grey’s Anatomy on my phone, drank a few Blue Moons, ate crackers and tuna for dinner, and somehow experienced an enjoyable night of rest).

The Going-to-the-Sun Road was open for 14 miles from the east, so we were able to make it to Jackson Glacier Overlook. Absolutely beautiful. I keep saying that, but I love these Rocky Mountains. So gorgeous with snow topped magic. Then when you add a lake or river or any type of water, bliss.

The last stop on the Rocky Mountain tour was Banff, Canada. We explored this adorable winter town (which was more touristy than Jackson!) and stayed in the best hotel, Banff Ptarmigan Inn (pristine, elegant room, a balcony that overlooked an indoor courtyard, a buffet breakfast with an omelet station, and friendly front desk staff). We walked around the down town area, listening to the accents, enjoying the chill and snow, still hoping for a bear to cross the road. 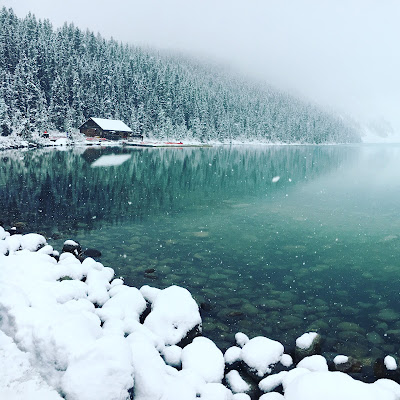 The next day, we drove up to Lake Louise, hoping the snow would hold off and we’d be able to hike up to one of the tea houses. Alas, no such luck. By the time we arrived, Lake Louise was covered in at least 4 inches of snow and it wasn’t letting up. We were advised by the rangers to walk around the lake rather than hiking up into the mountains. Okay, fine, we could do that; the snow slowed us down anyways. It was (again) absolutely stunning. Huge snowflakes falling into our hair, freezing our lashes. Wearing our snow boots for the first time. Posing by other people’s snowmen! Hearing more accents and seeing the wonder on people’s faces as the snow covered every surface. 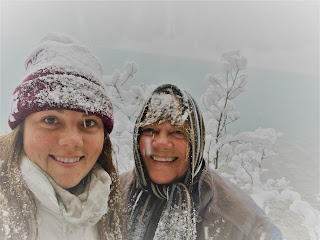 We decided to hurry on towards the west coast of Canada because a ranger believed we’d encounter dangerous roads on Roger’s Pass. You know, unpredictable mountain weather and all that jazz.

Thankfully, the roads were dry.

See y’all on the plus side of 32 degrees!