Just Can’t Wait to Get On The Road Again!

September 07, 2017
No road trip is complete without singing a little Willie! Every time we entered the car to go to the next location, I would sing the two famous lines of that song, and off we would go. “On the road again…” la la la *sways back and forth*

We entered Zion and the area immediately turned into large red hills and pine trees, similar to Bryce Canyon. We googled how the bus system worked (there aren’t places for parking, so we had to park outside the park or at the visitor center and take a bus to one of nine stops.), filled up our water, then found a park ranger to question. 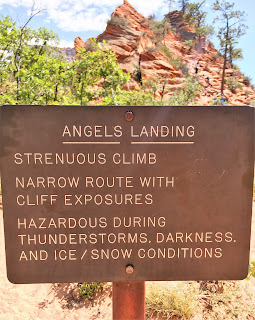 Amber asked what Zion offered that the other national parks didn’t, and after looking a tad dumbfounded, he told her Angel’s Landing. We initially were going to do the water fall hike, but the ranger said there wouldn’t be much water fall at this time of year. So, I convinced Amber to start the Angel’s Landing hike, with the promise that we could turn around at any point. (ha!) 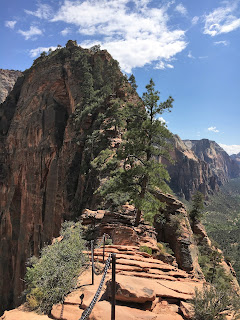 Uff. Da. That hike was intense. But amazing! And beautiful! And challenging! It was a 3.9 mile hike with a 1070 feet ascent to Scout Lookout. Then Angel’s Landing (you’ve most likely seen the photos: the thin red path with chains and poles? Where you could fall to your death if you took even the tiniest of missteps?) was an additional 1.5 miles and 418 feet. I left Amber a little before Scout Lookout, telling her I would see how far up I could make it towards the landing. 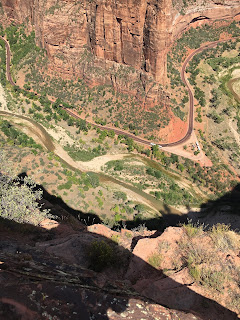 Well, I was about an hour from the top (reality may have placed it closer to 7 minutes away) and didn’t know if I could finish. My legs were exhausted. My lungs were having difficulties with the elevation (or maybe I was just that out of shape), and mentally, I feared my body’s ability to descend the rocks if I kept going, which caused a fear of falling to creep in (not to mention the 7 deaths that were mentioned on a sign at the beginning of the hike). I turned around and took two steps down the mountain, when I felt a physical force stop me. "Stephanie,” I said to myself (this was most likely the delirium from lack of oxygen to my brain), “the whole reason for this trip is to figure out you. You’re almost there. You can do this and you will get down safely. Finish the darn thing!" So I did. And it was beautiful. I felt accomplished. And excited. And when I made it to the top, everyone I passed said, “Congrats”, and the father and son I kept switching lead with were there with high fives. It was an emotional experience.

Descending to Scout Lookout was easier than I expected and believe it or not, fun. Reminded me of the rock part at Camelback in Phoenix (I always tried to race myself down to see how long it took me to get back to the helipad). Hiking from Scout Lookout to the bus stop was super painful. My legs had had enough movement for one day. I went down the majority of it backwards so I was pain free (while ascending, we wondered why two girls were doing the same thing! Now I knew).

Leaving Zion, we saw two packs of 20+ desert bighorn! It was an amazing finish to our Zion visit.

We drove to Page, Arizona, so we could visit Antelope Canyon and Horseshoe Bend. Advice: you need to pre-purchase your Antelope Canyon tickets. They only allow Navajo guided tours and they sell out months in advance. Boo. So unfortunately, we were unable to see this one (which was the coolest and most unique site!). Oh well, something to add to our future hiking trip when we hike the Grand Canyon, north rim to south rim, for a total of 24 miles! October 2018: who’s with us!? Training starts Oct 1.

Stayed at a bed and breakfast found through Air BNB (yay for other people cancelling last minute). The dogs were adorably friendly and the backyard had a fun gazebo where we ate breakfast. Not to mention the shower. The shower was heavenly. 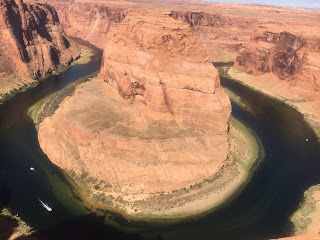 The next day, we started driving towards the Grand Canyon, with a quick stop at Horseshoe Bend. This was the easiest park to see. Drove a minute off 89, parked, and then began walking up a hill. The only negative was the sand. We wore sandals (you know, achy feet from Angels Landing), and the sand made it difficult to walk and exhausting for our legs. The view was great however. Made us want to take a detour and rent a boat for the afternoon so we could play on the water. Took the iconic picture then high tailed it back to the car and out of the Arizona heat.

Finally arrived at our fifth national park, the Grand Canyon! First stop: Desert View Watchtower, which made me sad. Our first introduction to the Grand Canyon and it felt like a tourist trap. So many buildings. So many people. I love parks for their remoteness or when I’m hiking a trail or driving on a road and only encounter a few people. Ahh, bliss.

Okay, fine, I’ll admit to one positive crowd story at Mather Point: we saw a group of people who appeared to be praying, as they stood side by side at the lookout, gripping the railing, their heads bowed, speaking quietly to each other. Then we saw a lady wearing a “Disney Tours” shirt lead people to the railings on the other side. After everyone was in place, she grabbed the camera hanging around her neck, turned it towards her people, then did a 5 second countdown. When she shouted, “Open!” about 30 people raised their heads, opened their eyes, and viewed the Grand Canyon for the first time. I admit that at this point in time, I was tired. Tired from my hike yesterday, tired from driving in the car, and tired of viewing the same scenery. However, their gasps of surprise and the aww in their voices made me see the Grand Canyon in all its glory and I was grateful to be standing with them. The Grand Canyon is majestic in her greatness. One day, I will return to further explore it. 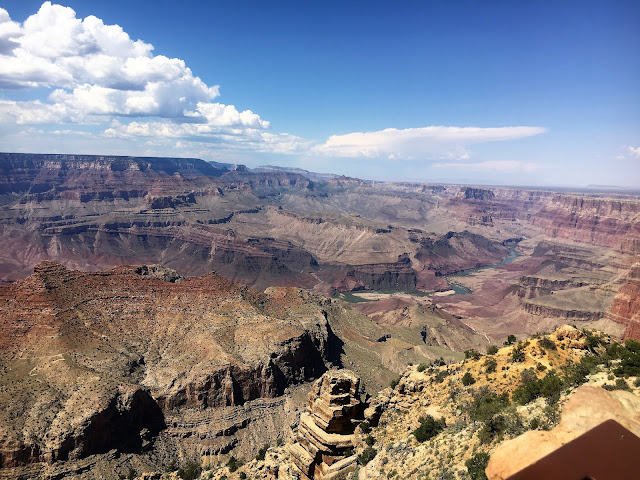 So, fun randomness: Sirius XM happened to give Amber two weeks of free stations that just so happened to occur during our road trip! Halfway through our trip, we somehow (don't ask, we're weird), started doing arm workouts whenever a Trisha Yearwood song played and then ab workouts when a Garth Brooks song played. Did I mention we were listening to the Garth Brooks station? hah. Yeah, the best songs were the duets that Garth and Trisha sang together! So, if you were passing us on the other side of the road, and happened to look into our car, you would see our arms doing circles or triceps dips and our stomachs either crunching side to side or doing leg lifts, or who knows what other movements we were doing while waiting for the song to finish. Whatever kept us entertained!

Onward to Phoenix to pack up Amber’s place then hitting the road for T-E-X-A-S!!!