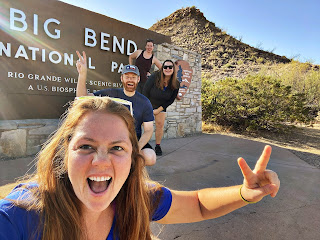 Living in Houston, I don’t often look up at the sky. Maybe if I realize it’s a full moon, I’ll find time to sit outside and enjoy the beauty. But the other days of the month? Stars don’t exist inside the 610 Loop of Houston. Which made our venture out to Big Bend even more spectacular.A perk to working for myself is that I’m able to schedule my days off whenever I want. So, when a nurse friend tells us she has 10 days off and wants to travel somewhere, we decided to go big. We narrowed down our destination to either northern Arkansas or Big Bend National Park. Then when vacations days were settled for the other 2 friends to take 6 days, we decided on Big Bend.

You don’t happen to drive nearby or randomly decide to detour to Big Bend. The only reason you’ll  travel anywhere near the park is because you purposely decide to make the trek to west Texas.  It’s 9+ hours from Houston (not including stops for gas, food, or detours to Del Rio for scenic routes), or 200+ miles if you decide to fly into Midland. 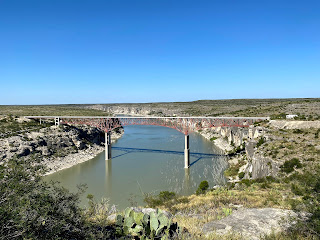 Based on recommendations, we took Hwy 90 for a trip through Del Rio. Highly recommend 830 Kitchen. It was delicious, the owner was a sweetheart, and we ended up ordering 4 apps, 4 meals, and 2 desserts! Walked off a bit of the food at the Del Rio International Bridge, our first foray into beautiful high cliff walls and rivers.

Roughly 11 hours after leaving Houston, we cruise into Terlingua to the sun setting behind the mountains. As we booked this trip last minute, only one motel had any rooms available, Chisos Mining Company Motel, which happened to be #4 out of 10 on yelp. Simple, but delightful staff, and clean rooms. Plus, those stars. Oh, those beautiful stars. As we were unloading our stuff, we all stopped and just stared up. Who knew there were so many stars in the sky?

Arrived at Desert Sports at 8:30AM on Saturday for our 2 day, 20 mile rafting trip. We packed our belongings into wet sacks and drove 15 minutes to Lajitas, where Zach and Bobski (our guides) loaded the 2 rafts with all the supplies before telling us to jump on.

We hit the water and the shear calmness made me fear for the next 36 hours, as well as for Zach’s heart. We didn’t know that we would be chauffeured down the Rio Bravo del Norte (aka Rio Grande). That we would just have to sit there and enjoy the scenery. We encountered a few rapids, tons of turtles, cows, and horses. The sun was stifling.

After a few hours of Zach rowing us, we beached on the Mexico side of the river. While Zach and Bobski made our lunch, we swam a bit in international waters. Then I started hiking down a path. Before too long, I see a man on horseback. Uh-oh. A bit of panic, are we allowed to be here? I hurry back to camp and ask Zach if there are supposed to be people around. He seemed surprised, but then chatted with the rancher when he came by, having roped a calf that refused to budge. The guy worked a ranch a few KM’s to the north. The calf’s mom was killed, so the rancher was bringing the calf home. 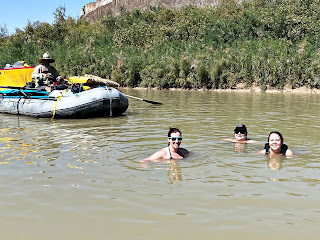 After lunch, we jumped back into the rafts and took off. An hour or two later, we hit the doldrums. Jenn had been itching to jump into the waters and at this point, Zach finally let us. We put on life jackets and floated near the rafts as the guys continued to paddle.

We docked about 3:00 PM, set up our tents, then started exploring. The water was rough in front, so we hiked down the shore to try to find an area we could float. We entered the water but the water was still a little strong, so we ended up hiking down a dried river bank. We hiked until we were out of water, then turned around (oops). Granted, we weren’t that far from camp, and we had been drinking tons of water all day on the raft.

The guys made us fajitas for dinner! They chopped and sizzled veggies, and meat, made rice and beans, delicious guacamole, and this amazing green salsa. We ate so well. They made us a camp fire to sit around as we chatted and watched the stars. Provided yummy wine. It was a perfect evening. Right before they went to bed, they brought out chocolate! Mmm, delish.

They stated they would be sleeping under the stars, which gave Kira, Corey, and me the idea to do the same! Every time I woke up, I’d just lay there, looking up. We lucked out because (1) It was a new moon, (2) It was 3 days before the Orionids Meteor Shower peak, and (3) Big Bend is ranked by the International Dark Sky Association as a gold tier-certified stargazing spot (a designation Big Bend shares with only 13 other parks worldwide). The region is also ranked number four on the International Dark Sky Association's top seven spots in the world to stargaze. Camping 5 feet from the water provided natural white noise as we fell asleep to the sound of rapids. 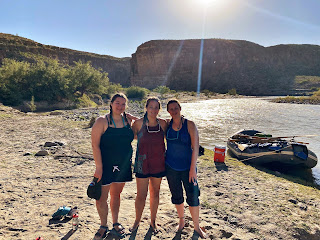 The smell of bacon woke me up and was probably the only thing that could have convinced me to crawl out of my sleeping bag. The breakfast tacos were delicious with fresh fruit. We drank hot tea and coffee and watched the sun rise over the mountains. After packing up camp, we hit the water again. Within seconds, we were cruising through rapids, into the limestone mesa that is Santa Elene Canyon. Rafting through these 1500-ft canyon walls was breathtaking. We kept on our long sleeved shirts as the sun wasn’t able to reach us. 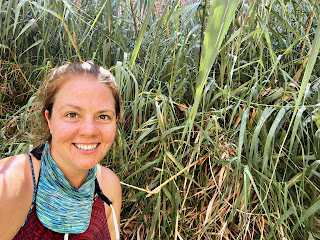 After a few hours, we beach on the Mexico border and Zach took us over and under boulders. It was fantastic! My absolutely favorite is climbing over large rocks. We hiked about a mile in (where if the desert actually received rain, would have been a river), but had been dried for years. We climbed through a rock that dripped water, which Zach and Bobski called the birthing.

We asked for a different route back, so when were through the boulders, instead of going left, the guys went straight and we somehow lost ourselves inside a bamboo jungle. They formed a path for us, but all of us tripped at some point. For some reason, we found it hilarious.

Finished the side trek with another delicious meal. We were impressed with the cookies and hummus. So yum.

After jumping back in the boat, we hit the Rockslide Rapid. Zach demonstrated his rafting skills as he maneuvered us through large boulders and rapids. 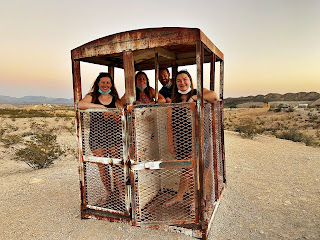 After we beached for the final time, we were driven across the Ross Maxwell Scenic Drive back to Desert Sports. Spent the night again at the Chisos Motel. On multiple recommendations, we ate at the Starlight Theater. Three of four of us were not impressed with the food. The staff were rushed, rude, and didn’t seem to care about being present. The food was mediocre.

The next day was awesome! We decided to explore the park on our own. We drove in from Terlingua all the way to Rio Grande Village (which was closed, b/c, well CoVid). We stopped at every overlook, including hiking the Boquillas Canyon Trail. Someone in our party may have purchased a cactus/roadrunner bead knickknack that happened to be at the overlook.

We then drove towards Chisos Basin Visitor Center for a NP passport stamp only to find that the stamps were already stamped to pieces of paper. Sad day. No date either. All visitor centers were closed because of CoVid but multiple centers had park ranger hours where they stood at a table in front, answering questions, and handing out stamped paper. 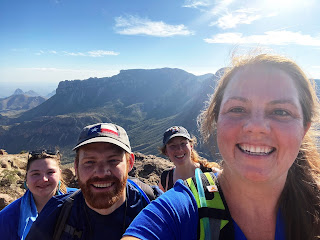 We hiked the Lost Mine Trail, which everyone said had the best views in the park. Agreed! Gorgeous, and doable out and back 4.2 mile hike, with a 1099 elevation gain to reach 7550 ft. My body loves these hikes! Thriving as we trekked to the top.

We left the park close to sunset, with a brief stop at Fossil Discovery Exhibit. We timed it perfectly for one of the most beautiful sunsets I’ve ever seen. No filter! 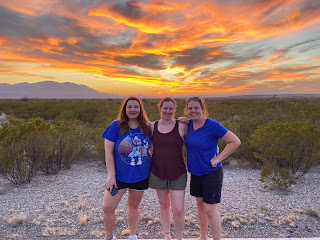 We stayed at an adorable Airbnb 15 minutes outside of Alpine for the next 2 nights. We hit up Marfa lights, but aren’t sure if we saw them or it was cars. Our Airbnb host said that if you see lights to the left of the red light, it’s the Marfa lights. To the right is cars. Well, we saw quite a bit slightly to the left. So, success! The lights also didn’t follow any steady pattern. Quickly going up and down, slightly zig-zagged.

Made it back to Houston in 9 hours, which included a brief, delicious stop in Boerne, TX at the Dodging Duck Brewhaus (check it out, adorable town!).

Overall, Big Bend was stunning, thrilling, and a wonderful 6 day trip. It reignited my desire to explore all the national parks!  On to National Park #45! 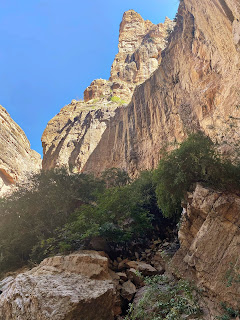 December 24, 2018
Hello Beautiful, Amazing, Wonderful People!  As 2018 comes to a close, I’m so thankful to those who’ve supported me over the last year. 2018 was a huge transition year for me. I entered it uncertain what the year would bring, where I would travel, who I would meet, even where I would be sleeping. Twelve months later, I’ve moved back to the city of my teen years, started a business, and am filled with a sense of rightness and jubilation. Many, many thanks to those who let me crash at their place when my life was filled with uncertainty. To those who sat down with me to talk out my business plan or brainstorm ideas.   To the remarkable people who frequently inquired about my progress and to those who have been praying for me. Thank you. Thank you. Thank you. Today, we took my Aunt and Uncle to tour Galveston. On the drive home, my mom, Aunt, and I sang Christmas carols at the top of our lungs. Before you picture beautiful harmony, let me explain that on a scale of 1 make
1 comment
Discover more »